How is 2015 coming along?
Mine has been jam packed since 1st in a good way. Gym, ran some errands , been going out to check out sales and I am about to go out again =)) .

Anyhoo, I got fascinated with this Mascara ever since I saw a lady using this in Airport last year. When she was done with her upper lashes, she closed the Mascara and  Bamn!! She went on to twist another side of the tube. Oh!! The joy. When I spotted this at the counter when they just got the package. They did not know the code to bill but still I wanted this. There was huge debate whether the product  is priced at 599INR or 600INR 😀  They said 599 but I was billed 600 :)) .


So here goes my take on the mascara: 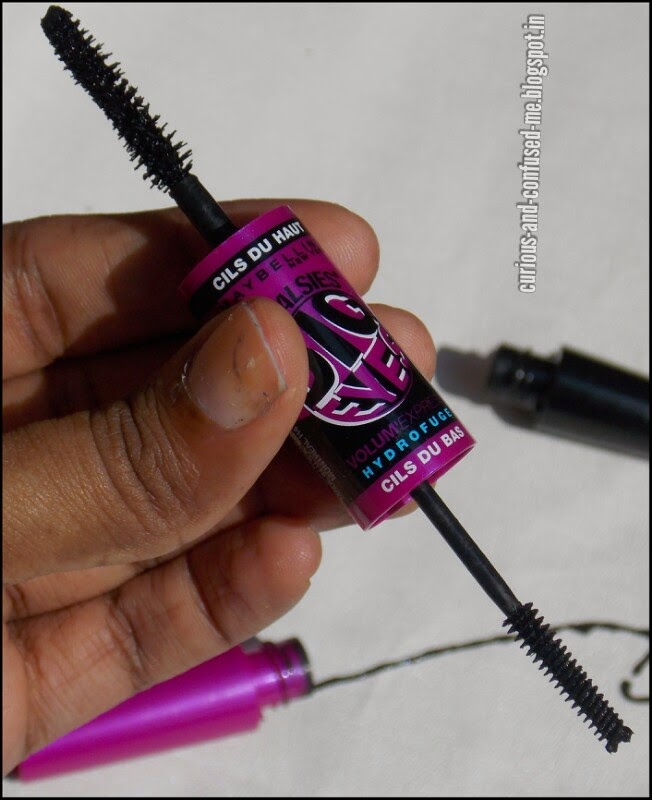 Upper lash brush:
It has twisty, spiral kind of design. The brush is fluffy, differs from the original falsies which has spoon like brush. It is designed to help you wiggle while application. It was not easy for me to use the brush at first. The product got distributed unevenly and clumped. After the 2-3 uses, I gotta hang of it .

Lower lash brush:
It is exactly designed as it has to be. It is thin, it separates the lashes perfectly and right amount of product comes out. You can actually coat each and every lashes patiently using this brush.

– If the excess Mascara is not wiped, during the second coat the lashes clump. So the best way is to wipe the excess off, and apply it. Also,  the lower lash wand can be used to comb through the upper lashes lightly to get rid of the clumps.

-The formula is gel like; On application feels kind of dry, it’s blackest of black.

-Gave my lashes volume and length. The volume provided is not false lashes extreme types but it will make the lashes visible. I also feel that it’s not that lengthening, only because my lashes are poor, it looks like it has lengthened it.

– I have the waterproof version. I use coconut oil to remove the Mascara , it should easily come off with the oil based makeup remover.

– It has stayed 7+ hours on me without smudging, I have removed the Mascara after that, I am sure it will stay longer than that. But the lower lash lost it’s charm after 6 hours.

Will I repurchase: No.Because Original Maybelline The Falsis works wonderfully for me and it is priced at lesser price. Also, now I have this double ended brush which started the whole fascination.

Though 600 bucks is little more when it comes to Maybelline, it is still cheaper and performs better than the expensive ones. After experimenting with the Mascara, I have learnt that along with formula, it’s the wand that makes the difference. These fluffy type works for me. But if you compare this with the original Maybelline The Falsis Mascara, it does not fare that well. It’s USP : it has 2 wands one meant specially for lower lash.

Will I recommend: Not really.  If you getting a good deal buy it for it’s lower lash wand, but it does not give 360 degree extreme wide eye results as Maybelline claims.

Also, I thank you all for the response to my last post I was overwhelmed.  It feels good to know that there are people who understands your mind and thinking, when some of the close old buddies thought I am choosing a wrong path.  Virtual hugs  :’)

Hi, Swathi here and welcome to my blog. Just a curious soul who loves makeup, fashion and traveling. Techie by profession, blogger by heart
Searching is in progress